Pedalling to the Golden Gate 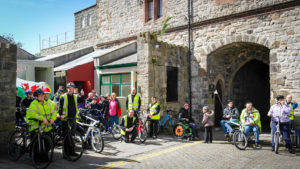 Antur Waunfawr provides work and training for adults with learning disabilities, and its bike shop, Beics Antur, was previously located on the Slate Quay in Caernarfon. 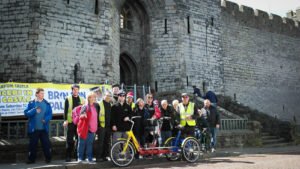 Antur purchased the Yard at Porth yr Aur site in November 2017, which was formerly owned by local transportation company, Pritchard Bros. The site is full of history, and the medieval town walls form part of the building. The ‘Golden Gate’ archway adjacent to the building was once the main seaward entrance to the medieval borough.

As well as bike hire, sales, and servicing, Beics Antur will provide increased health and wellbeing opportunities for individuals with learning disabilities at Antur Waunfawr, as well as serving as a well-being hub for the local community. 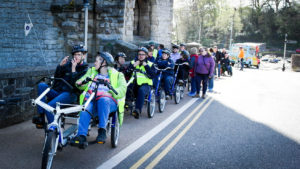 After several months of preparations on site, the big move of bikes and equipment took place in late April, with a celebratory procession around the town on the charity’s fleet of adaptive bikes.

Huw Davies, deputy chief executive at Antur Waunfawr, said: “This is a very exciting time for Beics Antur. It is a great opportunity for Antur to play a part in the development of adventure tourism in north Wales and to promote health and wellbeing in the community.

“We wanted to celebrate the move to our new site, and the procession around Caernarfon was a great success! It gave us the opportunity to ride the bikes around the town, greet local people, tourists and businesses, and to spread the word about our new venture.” 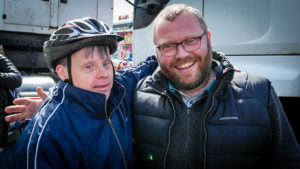