Antur Waunfawr would like to thank Criw Dydd Mawrth (the Tuesday Club) for their incredible generosity yesterday.

Criw Dydd Mawrth initially got together on the golf course in Penmaenmawr back in 2003, when four friends (Merlin Owen, Vivian Williams, Arwel Jones – three members of Hogia’r Wyddfa – and actor John Ogwen) decided that they would make a pact to play golf every Tuesday. By 2012, the number of players had increased to over 100.

Initially, the money collected would go to the winner of the game but, at the suggestion of Bryn Terfel, one of the early enthusiasts, the group started collecting the money over a year, and then dividing the total collected between local good causes.

This year, the group decided to make Antur their chosen charity, and we are all extremely grateful to them for this. The money will be used to fund a special day out for our workers! 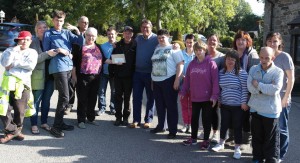