Digging in to history of bike shop’s new home 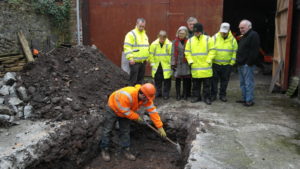 Archaeologists have been carrying out a programme of archaeological investigation at the new site of Antur Waunfawr’s bicycle shop, Beics Menai, at Porth yr Aur yard in Caernarfon.

Antur Waunfawr, a local social enterprise which provides work opportunities for adults with learning disabilities, completed the purchase of the town centre site in November. The building will offer increased space for the Antur to develop and expand the bicycle business, which is currently located on the Slate Quay in Caernarfon.

The site is full of history, and was formerly owned by local transportation company, Pritchard Bros. It is adjacent to the medieval town walls, which are designated as a Scheduled Monument by CADW. The castle walls themselves actually form part of the building, dividing Porth yr Aur yard from the listed Royal Yacht Club building next door.

The survey is being conducted by CR Archaeology, an independent archaeological unit based in the Conwy Valley.

Begun in 1283 by King Edward I, the town walls incorporate Caernarfon Castle and were built to protect the new town borough. Porth yr Aur, or ‘Golden Gate’, was the main seaward entrance to the medieval borough and it was an integral component of Caernarfon Town Wall.

Matthew Jones, of CR Archaeology, said: ‘Whilst carrying out the survey at the site, we came across an interesting cobbled floor surface. Sadly, there were no finds to give a definite date to the surface, however, it probably dates from the 18th /19th century and would have belonged to the house which fronted on to the high street at the time.”

Menna Jones, chief executive of Antur Waunfawr, said: “We are thrilled to have purchased a site which plays such a significant role in Caernarfon’s history. It has been very exciting to see what the archaeological survey has uncovered. You never know, we may come across more interesting finds as the construction work begins!

“In the meantime, it will be business as usual for Beics Menai, which will continue to operate from a temporary Porta Cabin at the new site.”